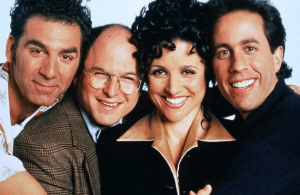 This year marks the 30th anniversary of the series premiere for Seinfeld, the NBC sitcom created by Larry David and Jerry Seinfeld. Several popular terms and catchphrases made famous by the show (such as No Soup for You, Yada Yada Yada and Low Talker) are still widely recognized more than 20 years after the end of the series. To honor the intellectual property created by this 1990s hit comedy show, test yourself with this Seinfeld trivia: